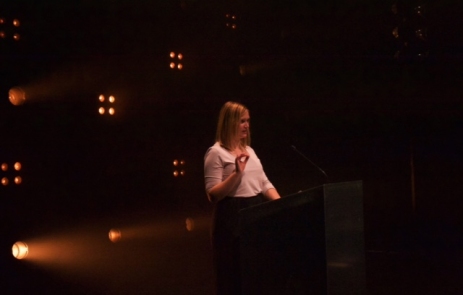 We all have a few awkward relatives in our lives, embarrassing family members that we really would rather not talk about, but they’re family and we didn’t choose them so everyone understands, it’s no big deal.

Timo Krstin is the director of K.U.R.S.K. theatre and the star of Leopard Murders – delivered as part of Manchester’s Flare festival of new international theatre. Timo’s family secrets are darker than most though, and they form the basis of this extraordinary show that explores the politics of populism.

The performance is led by Timo, he tells the no-holds-barred story of his early life in southern Germany and his connection to a grandfather who died before he was even born. George Ebrecht was his name, a German settler in Eastern Africa in the 1920s who failed to maintain his farming business or his intended writing career and who eventually returned to Germany. Shockingly, he went on to become one of the highest serving SS officers in the Nazi party – directly responsible for the murder of thousands.

Timo’s performance is powerful, openly discussing the kind of things that most people wouldn’t dare want to reveal about themselves. There are excerpts from Ebrecht’s failed novels written during his time in Africa which give a clear indication of his thoughts on anyone different to himself; Timo also provides short anecdotal stories from his own past, measuring them against the forces that shaped his grandfather’s path.

This is pretty powerful theatre, with material that would be offensive to most people. But it’s incredibly brave, seeing Timo’s story in person is far more educational than reading about it in history books or watching television documentaries. And without any doubt, having it brought out into the open via performances like Leopard Murders is surely better than brushing it under the carpet and hoping it stays in the past.

One thought on “Leopard Murders”

Follow The Greater Manchester Reviewer on WordPress.com
Join 57 other followers